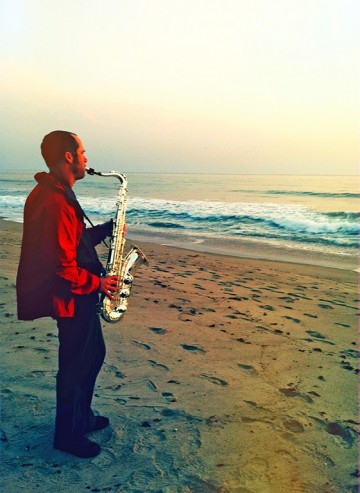 I’m a musician and fine artist living in Tucson, Arizona who likes to connect with people, enjoys life and thrives in the surreal.

I’ve played tenor and alto saxophone for more than three decades, and I’m told I possess a rare degree of improvisational talent. I’ve been called a “virtuoso” in the press, and have a reputation for playing well with others in the music scenes I’ve been part of over the years.

Playing sax all the time isn’t enough though, so I’ve taken up piano, synth, Irish fife, Bolivian quena, vocals, electric and acoustic guitar, didjeridoo, hand drums, harmonica and just about any other instrument I can get my hands on.

Over the past few years, I’ve been writing songs in addition to all the improvisation, learning the ins and outs of studio recording and audio engineering. I see the recording studio as an integral part of the whole music-making process, and view it as a sort of instrument in its own right.

On this website, there are two distinct music sections. On the Pulse Flow page, I’ll be releasing songs that are recorded in a single take, without overdubbing or post production, while I improvise in the studio alone or with friends. On the Music page, my albums of more polished, produced pop songs are available for purchase. You can also listen to 30-second clips of these songs. The same albums are available on iTunes, Amazon, Google Music and the other major online music shops, but if you buy them from me here, I’ll get more of the proceeds.

You’ll also find a bunch of visual art, most of which is a bit old since I’ve been focused more on music over the past decade.

I’ve been performing sporadically — as a solo entertainer and with a diverse assortment of bands, circuses and other performance troupes — for decades.

In the scary downtown Phoenix underground art scene of the early 1990s, I was a member of the legendary guerilla performance art band Orphans & Widows, and guest soloed in a variety of other acts.

Also in the early 2000s, I co-founded an electro-acoustic ambient music duo with Rick Davies called Simple Question, which plays sporadically and has a back catalog of recordings soon to be available for purchase.

I enjoy making a living as a custom website developer and graphic designer at Raven’s Eye Design, LLC.

I also enjoy hiking, camping and communing with nature, hatha yoga as fitness, bicycling as transportation and fun, watching and “talking with” crows and ravens, and finding myself with friends in surreal experiences reminiscent of David Lynch movies.

I walk a spiritual path, but have no interest at all in religion or dogma of any flavor.